BEIJING, Nov. 4, 2022 /PRNewswire/ — Power Construction Corporation of China (PowerChina) is actively participating in the “Belt and Road” initiative in Africa, responding to the planning and demand of African countries.

At PowerChina, African staff plays a significant role. Employment is a key issue in African countries, especially women’s right to work. Two female Caterpillar drivers are able to earn a dignified living since their collaboration with the PowerChina at the rehabilitation site of Lot 2 of National Road 4 in Cameroon. Such examples are not uncommon. After finishing school in China in 2014, Kilenga Nelly managed to be recruited by the Zongo II hydroelectric power plant project once she returned to the Democratic Republic of Congo (DRC), allowing her to contribute to the development of her own country.

In April, the company organized the first job fair in the DRC, at the University of Kinshasa, during which more than 90 students submitted their CVs. It is worth noting that some local employees are now in management positions. Young Cameroonian Ngangoua Serge started at PowerChina as an intern in 2008. After his doctoral studies in China in 2010, he assisted in establishing an office in his country and five years later, he was appointed as PowerChina’s representative in Cameroon. 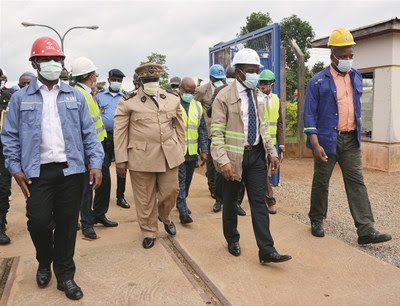 To achieve its Vision 2035 of becoming an emerging nation, Cameroon planned hydro power plants in 2009 to address the electricity shortage. PowerChina succeeded in taking charge of the construction of the Memve’ele hydroelectric power plant. PowerChina has also built roads here. The Mintom-Lélé section has changed the daily lives of the local population, facilitating the local transport of people and goods, and has greatly stimulated economic activity.

PowerChina has a tradition of volunteering at schools, orphanages and neighborhood hospitals near construction sites. On December 22, 2018, the company’s volunteers in Ivory Coast gave about 100 children Christmas gifts worth 1 million CFA francs ($1,557). Besides, PowerChina has joined the fight against the COVID-19 with the local community. Volunteers from the Zongo II hydropower project held an epidemic prevention presentation event at a school in the village of Zongo in the DRC in May 2020. The volunteers also used vehicles to spread messages to prevent the epidemic. They drove through more than 10 villages in the DRC, making more than 30 presentations, covering more than 30,000 people.